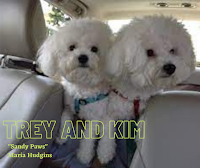 The beach rental house called the Osprey’s Nest was full of summer guests and should have been full of laughter and music but it wasn’t. It was dead quiet. In fact, it looked a bit like Gettysburg the day after the battle. In the big central living room people lay on the floor, sprawled across sofas, slouched in leather recliners, and slumped over laptop computers with hands hovering over keyboards. Crumpled paper dotted the floor. Glasses of iced tea and bottles of beer sat forgotten on tables. Flip-flops were scattered randomly around the room, but the people weren’t dead. They were writers.

They called themselves the Sand Fiddlers Writers Group and this was the week of their annual retreat. Sophie Perone, author of the popular Mysterious Gourmet books, had volunteered to do all the cooking and on this morning, Sophie had arranged her special cheese straws in tall glass tumblers and placed them all around the room so the writers could snack on them while they were working. Fresh from the oven, they smelled divine. The cheesy aroma wafted out through open windows.

With a bang, a screen door flew open and crashed against the wall behind it. A gigantic, wire-haired dog pounced in and circled the room, tables flying in all directions, baskets of shell collections and beach glass hitting the floor, iced tea and beer anointing the walls, the writers, and, most especially, their precious laptops. Screams and curses brought the whole soporific scene to screaming life.

“Get that dog out of here!”

Jessica Chastain had also brought her two little Bichons and was silently gloating over the fact that they—Trey and Kim—were so much better behaved. They may have been salivating from the smell of cheddar cheese, but they sat obediently by Jessica’s side. Jessica had handled the arrangements for the rental and she was aware that her name was on the papers that spelled out responsibility for damages to the house. The floor would be okay, she thought, but the furniture—soaked upholstery, broken table legs—she would have to check all this out later.

Jessica firmly refused to let anyone refer to her as the leader of the group, not out of modesty, but because she knew that with “leader” came responsibility and she would get less writing done. She had posted all the information guests might need beside the house telephone and made up her mind to deal with any and all housekeeping issues by simply pointing to the phone. Jessica—her friends called her Jessie—was totally deaf as a result of a medical mishap when she was in her twenties. “The best thing ever for a writer,” she often said. “I could write through a zombie apocalypse.” But her deafness did require her to bring her service dog, Trey, to act as her ears and generally look out for her as Jessica was prone to get lost in her work. By and large, she used text messages rather than phone calls to communicate. She did have a voice-to-text app on her computer and her phone, but she found that the tech world still had trouble with English idioms and it sometimes made for strange translations. For in-person conversation, she had no trouble with lip reading as long as Trey reminded others to face her when they were talking.

There was also her dear Kim, a much-abused female who had run away from a puppy mill. Kim had no responsibilities other than to serve as playful companion.

Jessica and her dogs shared the patio on the first floor with Philip and Atlas. Their rooms were separated by sliding glass doors from the fenced-in area on one side of the house. This, Jessie suggested to Philip, meant that they would be able to let the dogs out in the middle of the night without having to take them for a walk. Atlas was fun to watch because he was still learning how to control the huge frame Mother Nature had given him. The mess in the living room was proof that he still had a lot to learn. Jessica had, at first, been leery of how he would get along with her dogs, but after introducing the three, she found that Trey, like Mr. Carson of Downton Abbey, took over and established the rules for Atlas. Trey was definitely the alpha dog.