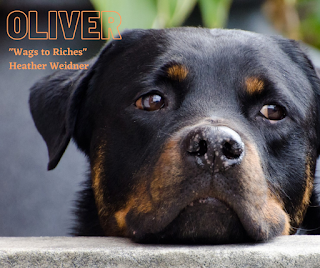 A tat-tat-tat echoed through the quiet office. Before Cassidy Green, owner of the Amelia Speedway, could answer it, another staccato round of tapping sounded. Her Rottweiler raised his head and looked toward the source of the noise. Cassidy pulled open the wooden door. A woman in a magenta track suit hovered over the threshold, her hand in the air, mid-knock.

“Uh, hi,” the woman said. “I’m Marti Davis, and your gal at the check-in table sent me over to see Mr. Oliver.”

Cassidy looked over her shoulder at her Rottweiler, lounging in his bed. “I’m Cassidy Green. That’s Mr. Oliver.” Cassidy suppressed a smile. Her staff always sent the problem cases to him.

“She sent me to talk to the dog?” the woman sputtered. “Is she nuts?”

“How can I help you?” Cassidy asked.

Marti made a harrumphing noise and planted one hand on her hip. “I paid for a stall for your Junk in the Trunk rummage sale, and the idiot next to me has taken up three spots. How am I supposed to do my preliminary setup when that oaf won’t budge? And I thought today was to see our location and bring our stands and tables, not unload a crapload of junk.”

Cassidy picked up the clipboard on her desk. “Davis, uh, here you are. You have one of the larger spots behind turns two and three. Let’s go see what the issue is.” She grabbed her phone and keys. “Oliver, you’re in charge while I’m out.”

The giant dog, who was a teddy bear when he wasn’t in security mode, sighed and closed his eyes for a nap.

“This way.” Cassidy pulled the door behind her. Marti matched Cassidy’s stride as they walked past the shuttered food and souvenir shacks to the grandstands. The racetrack, built by Cassidy’s grandfather, had been a fixture in this rural part of Virginia since the 1960s. When her father passed away a few years ago, she left her job in marketing to run the day-to-day operations. Her Uncle Henry, who also lived on the property, took care of the racing details and fancied himself the official groundskeeper.

Cassidy led Marti, who had started breathing heavily, past the Junk in the Trunk patrons’ tables that circled the track’s fencing. The sellers brought all kinds of tables and backdrops for their wares, a lot of them looked like professional tradeshow displays. Cassidy slowed her pace as they rounded the turn near the back gate and the garage area.

Where there should have been five sellers, there were three. A meatball of a man in silver running shoes waved both arms and guided two younger men unloading heavy furniture from a pickup truck.

“See, I told you. He thinks he can do whatever he wants.” Marti pointed at the man who was as tall as he was wide. “I’ve known him for thirty minutes, and I want to kill him.”

The man spotted the two women and waddled over, waving both arms. “Oh now, you’ve gone to complain and whine some more. Why can’t you mind your own business? You one of those do-gooders who has to boss everyone around?” He pointed his meaty finger up at Marti and coughed.

Marti huffed and folded her arms across her ample chest. She towered over the man by a good six inches. “I told you about how he is. I want a new slot. I can’t spend my entire day tomorrow next to this, this…. He’s toxic.”

“It’s Ron. Ron Silver, and I sell high end, gently used furniture.” He turned toward the two men who set a cherry dresser on the ground with more force than necessary. “Hey, you two. I don’t pay you to break stuff. Watch yourselves. And Zac, I don’t care if he is your friend. I’ll fire him and you. Being the grandson has no status when it comes to work.”

The men picked up the dresser and moved it next to the matching headboard.

“Mr. Silver, I’m Cassidy Green. You paid for one slot at tomorrow’s sale. I’m either going to have to charge you for two additional spaces, or you’re going to have to move some of your items.”

“We’re getting our stuff arranged. I’ll move it in a bit. If this one,” he said, jerking his head in Marti’s direction “had given me time to explain, she would have known I was in the process of arranging my stuff. It’s all about the presentation. Selling furniture is an art form.”