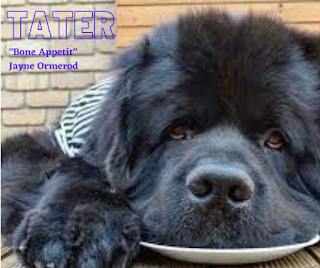 Get out of my kitchen!” I yelled at Tater, the one-hundred and thirty-pound Newfoundland dog who had burst into my workspace and taken an interest in the crown roast of pork sitting on the counter.

“Molly, put the knife down before you hurt someone!” Becca Kilpatrick yelled to me as she burst through the kitchen door in Tater’s wake.

I hadn’t realized I’d been brandishing my Wustof’s classic chef’s knife, my pride and joy. I slipped it onto the counter before any blood was shed, especially mine. It was that sharp. But something needed to be done about that mongrel. Ten movers-and-shakers from our small seaside town of Sea Haven were expected for Mrs. Wade’s dinner party, and she would not be a happy camper if the main course was in the dog’s belly.

“I’ll get him.” Becca dropped her purse on the slate floor. She was my best friend and server for this evening’s event and had just arrived to help with set-up. The dog must have barreled through the door when she’d opened it, as that dog had a habit of doing. She grabbed Tater by his red collar and pulled with all her might. She may be tall, willowy, and strong as an ox, but she was no match for the mutt.

I ran to assist in banishing the beast from my kitchen. My shorter, stockier build gave me leverage as I pushed the brute from behind. We battled that stubborn mutt a good five minutes. Some cuss words may have passed my lips, as happens when I lose control of a situation. Eventual success, but not due to our efforts. No. Credit goes to the squirrel prancing across the backyard. Tater raced off in pursuit, yapping happily.

I slammed and locked the French door, sliding the security bolts at the top and bottom, just to be sure.

Becca bent at the waist, put her hands on her knees and drew deep breaths of air.

I leaned against the kitchen counter and did the same.

I nodded in agreement. Forty-something was too old for a lot of things, I’d learned.

“That is one strong dog!”

“And stubborn. Can’t blame him though, after what he’s been through lately.” What Tater had been through, in a nutshell, was being dumped by his dog dad, Dustin Wade, while the college dropout went in search of himself. I think his primary motive was to find a sexy signorina somewhere along Italy’s Amalfi Coast. That was three weeks ago. The poor dog now exhibited signs of severe separation anxiety. Partly because the human Tater had attached himself to was no longer around, but perhaps more so because nobody in the Wade household paid a bit of attention to the mutt, let alone took him for a romp on the beach every day. The five-year-old puppy-at-heart was starved for attention and acted out by chewing anything that didn’t move, to include but not limited to, high-end furniture and expensive leather shoes.

Mrs. Wade had threatened to ship the dog to the glue factory. Yes, he might be the size of a small pony, but I don’t think he would have been accepted at the Elmer’s processing plant, so don’t worry.

Mr. Wade, on the other hand, had a soft spot for his only son, and by extension, his only son’s dog. He’d threatened to ship Mrs. Wade to the glue factory.

Yes, there was trouble in paradise here at Casa Wade.

The family fighting—mostly yelling which a few times had devolved to wine-glass throwing—might be the third contributing factor in Tater’s unruly behavior. I know I’d been tempted to gnaw on something when the shouting commenced.

“Hey,” I said to Becca once we’d both caught our breath. “We need to get crackin’. There’s much to be done and less than two hours to do it. The florist should be here any minute with fresh flowers for the front room and dining table.”

“I don’t know for sure, but Mrs. Wade usually uses Happy Petals.” Rose Campbell owned Happy Petals, a small florist on the outskirts of town. My boss had a soft spot for small, struggling businesses owned by single women. I had the honor of being one of her “projects.” I will forever be grateful to her, as I have now achieved financial independence working as a personal chef, which I absolutely love.

“It’s a big night for the Wades,” I told Becca, “so think classy not flashy. Can you please work your tablescape magic to match the mood?”